GenZ has Spoken for Coachella 2023

Throughout the 2010s, Millennials dominated the music festival scene. Among the most prominent and noteworthy music festivals is Coachella. Coachella is a music festival that is held once a year during the month of April in Indio, California, where thousands of people, especially Millennials, flock to listen to the world’s biggest artists under the desert sun.

Fast-forward to 2023, GenZ is now the new and emerging age group dominating the music festival scene and leading music consumption, concert, and festival participation, followed by Millennials. Moreover, GenZ is almost 2 times more likely than Millennials to have used music streaming apps such as Apple Music or Spotify in the last month.  GenZers are also 1.6 times more likely to attend music festivals than Millennials. In preparation for this year’s Coachella music festival, the release of the 2023 lineup caused much commotion on social media and the news.

Since the festival’s early years, 2023 is the first year in which all the headliners are diverse. Headlining this year’s event are Frank Ocean (African American and LGBTQ), Bad Bunny (Puerto Rican), and BLACKPINK (South Korean). Bad Bunny and BLACKPINK are also non-English dominant headliners, as Bad Bunny’s music is primarily in Spanish, and BLACKPINK’s music is in Korean and English. For reference, past headliners have been Lady Gaga, Beyonce, The Weekend, Radiohead, Calvin Harris, Eminem, Guns and Roses, Kendrick Lamar, Ariana Grande, Harry Styles, Billie Eilish, and more. This year’s lineup of headliners is especially historic, given that BLACKPINK is Coachella’s first-ever Korean headliner and Bad Bunny is the first Latino artist ever to headline any major American music festival. This revelation is especially important given that GenZ is often characterized by its values favoring diversity, inclusion, and progressive schools of thought. This Coachella lineup emphasizes Coachella’s new primary target consumer, GenZ, by putting their values at the forefront of their festival experience. 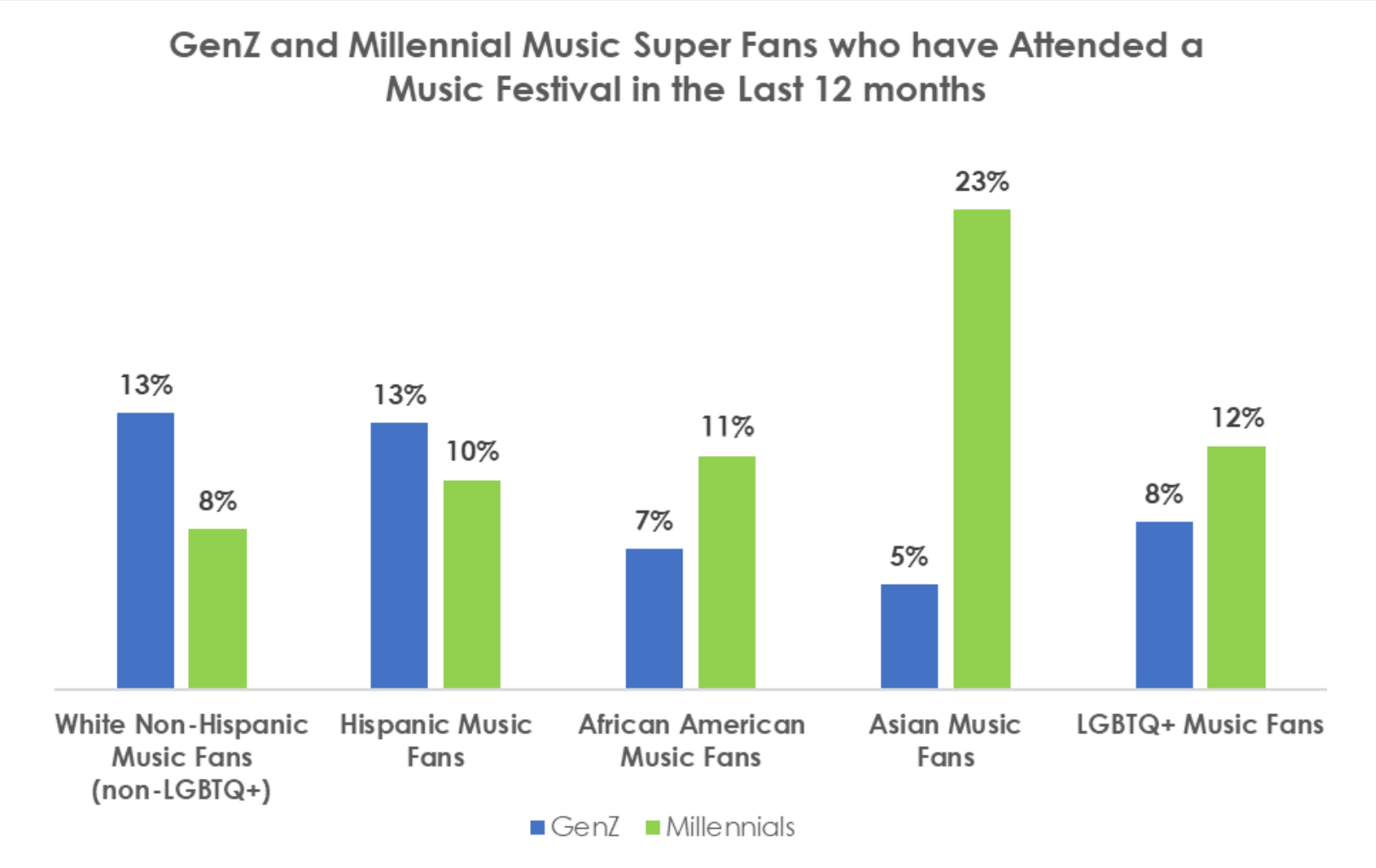 GenZ is not alone in its love of attending music festivals. Compared to White Non-Hispanics, Asian music fans are 2 times more likely than White Non-Hispanic music fans to attend music festivals, followed by Hispanics, who over-index by 50 percent, and African Americans, who over-index by 15 percent. Compared to other music fan segments, Asian Millennial music super fans have a significantly higher music festival attendance, with almost 1 in 4 attending a music festival in the last year. Music fans who are Asian and Hispanic are also much more likely than White Non-Hispanic music fans to consume music on YouTube, Spotify, and Apple Music. Considering this year’s diverse lineup with Hispanic, Asian, and African American headliners, it’s likely that fans who share the same culture or heritage as the headliners will flock to this year’s Coachella festival.

As the music industry evolves to cater to new audiences, it will be intriguing to watch how GenZ, the new primary festival attendees, will change the landscape for future talent performing in music festivals. We celebrate diversification across all platforms and media, such as broadcast, streaming, music, and entertainment. It’s essential that all consumers see themselves in all the content they consume.

For more about the segments Santiago Solutions Group specializes in, check out our Actionable Cultural Insights / Segments page.

We use cookies and other tracking technologies to improve your browsing experience on our website. By clicking “Accept”, you consent to the use of ALL the cookies.
Do not sell my personal information
Cookie SettingsAccept
Manage consent

This website uses cookies to improve your experience while you navigate through the website. Out of these, the cookies that are categorized as necessary are stored on your browser as they are essential for the working of basic functionalities of the website. We also use third-party cookies that help us analyze and understand how you use this website. These cookies will be stored in your browser only with your consent. You also have the option to opt-out of these cookies. But opting out of some of these cookies may affect your browsing experience.
Necessary Always Enabled
Necessary cookies are absolutely essential for the website to function properly. These cookies ensure basic functionalities and security features of the website, anonymously.
Functional
Functional cookies help to perform certain functionalities like sharing the content of the website on social media platforms, collect feedbacks, and other third-party features.
Performance
Performance cookies are used to understand and analyze the key performance indexes of the website which helps in delivering a better user experience for the visitors.
Analytics
Analytical cookies are used to understand how visitors interact with the website. These cookies help provide information on metrics the number of visitors, bounce rate, traffic source, etc.
Advertisement
Advertisement cookies are used to provide visitors with relevant ads and marketing campaigns. These cookies track visitors across websites and collect information to provide customized ads.
Others
Other uncategorized cookies are those that are being analyzed and have not been classified into a category as yet.
SAVE & ACCEPT
Share This